What's on your mind?

If you haven't read part 1 please do so before you read this, thanks!

Name suggestions are needed so feel free | FandomYou ask, you receive! This is a fanfic I started…survivorsdogs.fandom.com

Anyways...this is still the first chapter

sorry the lighting is bad...I'm using a flash light because it's almost midnight here.... 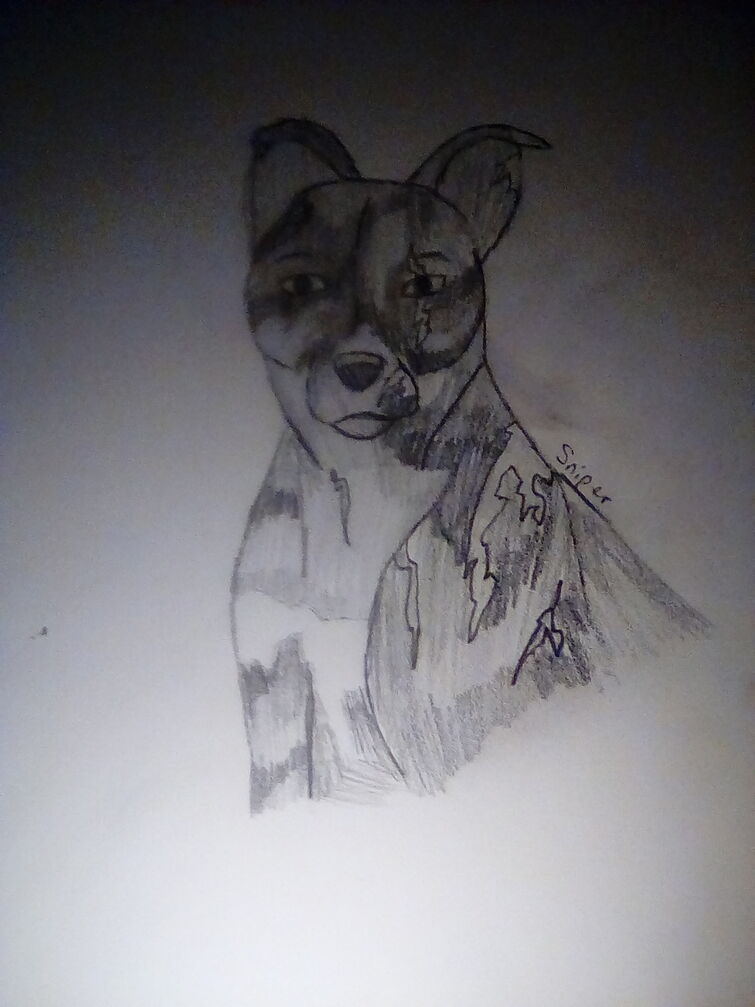 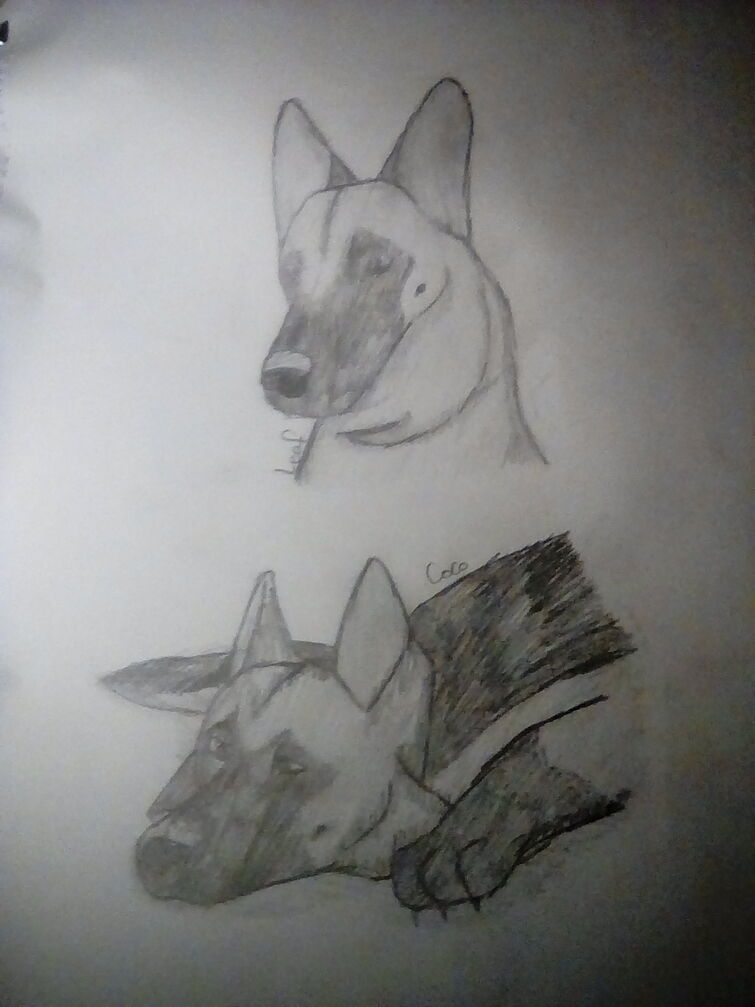 Sniper is a male brindle Pitbullbull

Leaf is a female Belgian Malinois

You ask, you receive! This is a fanfic I started a few months ago and I know a few people who want to read it. Including people on Deviant Art so I shall give you What I have so far. They know some longpaw terms so just know that's why they are there...I also forgot some of them...it's been a while since I read the books...

Anyways I hope you enjoy!

Leaf snarled as the longpaw came towards her. She lashed her tail in a warning. The longpaw in front of her held his arm out. The large glove is all I need, she thought. The longpaw holding her back with the leash held her tight as she lounged and barked furiously. The longpaw dropped the leash and she bounded towards the suited longpaw. She leapt latching her strong jaws around the glove. She yanked and pulled aggressively until the glove came off. Once it came off, she wagged her tail happily and waited for the longpaw to praise her. He walked over to her and rubbed her head and ears. he said something she couldn't understand but she thought it must be a good thing because He didn't seem angry. The other longpaw put the leash back on her and lead her back to her cage.

"So Leaf, how'd it go?" A large black and ran Fight-Dog asked. "Well he seemed proud of me." She replied. "That's only because your a Belgian Malinois." Another dog sneered. " Breed doesn't have anything to do with it. " She replied, feeling a little hurt. "Oh, yes, it does!" That dog snarled back. " Your breed learns a lot faster. " "Really?" Lead asked. " Yeah." The black and tan dog replied before the other dog could. "Oh, hush Coco. Your no different." Snickered the other dog. "Your just mad, Sniper." Coco growled. " She's got a point. What's your deal anyways?" Leaf asked Sniper. "They want smart and strong dogs. I may be strong but you two will always learn faster than I do." Sniper growled. "Well that's not right." Leaf replied. "No what they're using you for isn't right!" Sniper replied. "What do you mean?" Coco asked. "Ever wondered where I got my scars?" He asked. Coco sat down and Leaf cocked her head. "Well they use us to fight. They get paid to do it. Especially with Pitbulls like me." He said. " That's awful." Leaf whined. "Well is there anything we can do?" Coco asked. "No. We just have to fight and hope the other dog doesn't kill you." Sniper growled. "What if we escape?" Leaf suggested . "How do you suppose we'll do that?" Coco asked. "Tomorrow when they take me out to the training ground, I'll figure out how to escape with both of you." Leaf answered with a smirk.

Spoiler alert something bad is about to happen...

But as of now I'm going to sleep. I'll finish tomorrow or Monday with the rest of what I have. That's only 2.5 pages.

Welp...I haven't been active here in months...I hope y'all have been doing well...sadly one of my friends passed away...so did her father and brother...this week has been just tragic...

I may try and do some fanart....in honor of pride month and survivors...because I haven't drawn anything in a while....and it's weird not drawing...and maybe it will distract me...because my emotions are messing with me...

Anyways hope y'all have been well! Seems it's more active here than the last time I checked?

I drew an artistic representation of the events following Wiggle's death... 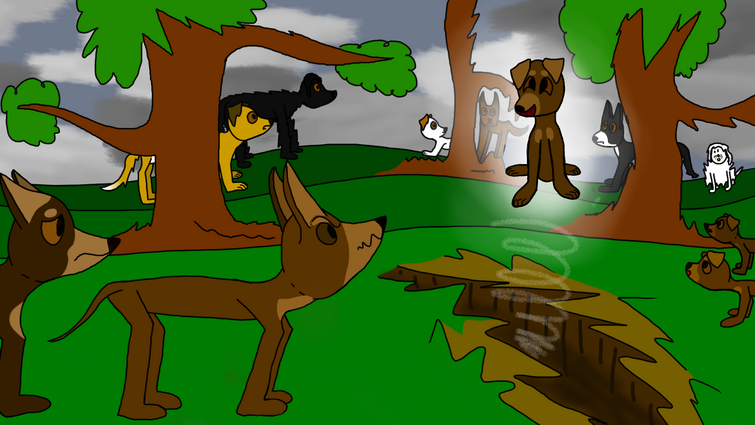 (and this is the cover art for that Survivors song I mentioned a while back!) 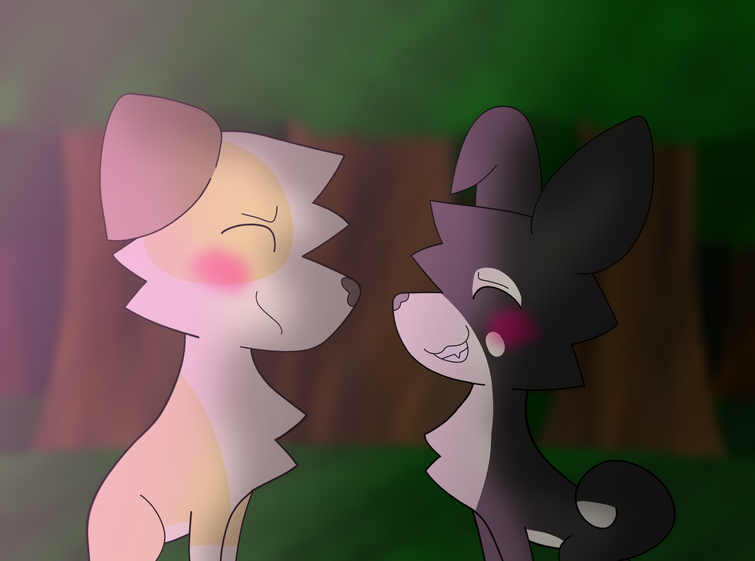 I LOVE THIS SHIP

THEYRE SO GAY IN THE 3RD BOOK

I honestly think that this ship makes mores sense than both LuckyxSweet AND MickeyxSnap combined. First off LuckyxSweet is the most toxic relationship in the first arc and one of the most toxic relationships overall. Sweet is just a massive jerk to Lucky and Lucky just desperately wants attention from her when she's giving him none. And then as soon as Alpha/Dog/Wolf (or whatever the heck this name is I don't even care) is out of the picture she tries to get as close to him as possible??? What?? Sweet makes no sense to me at all and she never will. The the next book they become mates?? What the heck?? And then we all know what happened in arc 2 which I will not talk about hereeee. I want to make a full YouTube video explaining why Sweet and Lucky are the most racist pieces of crap in the whole series. I have noting to say about MickeyxSnap except that it came out of nowhere. They talked like 2 times then became mates in Storm of Dogs, and then they have like a few moments in The Gathering Darkness together, and they had absolutely no chemistry. MickeyxLucky however makes a lot more sense. When Mickey leaves to find his people in Darkness Falls and like 3 chapters after (idk I haven't read the book since 2018) when Lucky gets exiled or whatever the first thing he does is goes and looks for Mickey. And the a little later after Mickey's house collapsed, Lucky comforts him and ARGG THIS SENCE WAS SO CUTE. And then afterwards they raise a child together,, like,, #couplegoals honestly. I might be biased because its a gay ship but anything's better than LuckyxSweet

Rant over, sorry for taking up valuable moments of your life with my gay dogs

In regards to my last poll of who should I draw, I drew Breeze.

Though not accurate to book description I had a lot of fun painting her piercing blue eyes and the spruce branches surrounding her. Out of curiosity, if she had a novella what would be the title of it? Also let me know who should I draw next? :) 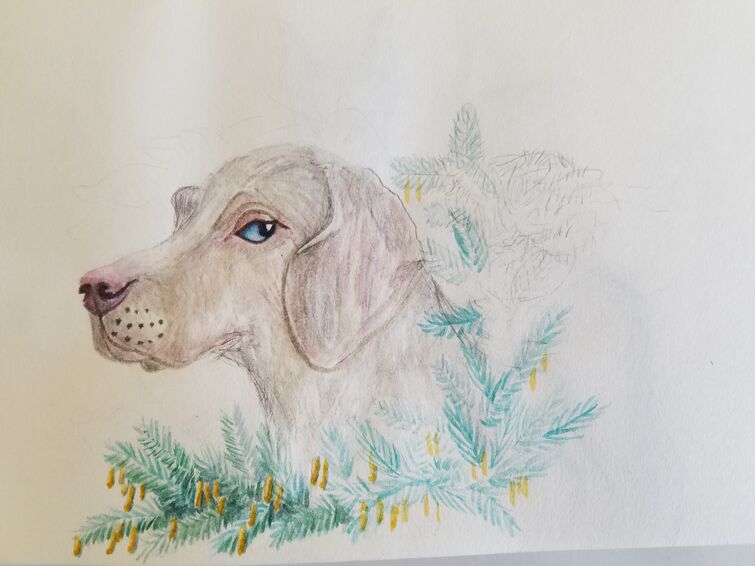 Hey everyone! This is just a quick reminder that this wiki is a space where everyone deserves to feel safe.

It's LGBTQ+ pride month, and since I know myself and many others on this wiki are part of the LGBTQ+ community, I'd like everyone to remember that transphobia or homophobia of any kind is not allowed on this wiki. If you harass anyone for this reason, you will be banned.

The same goes for all discrimination or harassment. If anyone is bothering you, or you notice someone else is being harassed on this wiki, please message me or another admin on our walls so we can see how we can help.

I'm happy that our community is largely supportive on our little fictional dog wiki, but still, remember-- it's never okay for anyone to make you feel lesser, no matter the context.

As I was looking through the wiki, I noticed that the main page is a bit barren. So I came up with an idea, that is, to input a header on the main page titled 'Packs', and underneath be placed a series of pack totems that carry the link for each pack.

So far I have made one concept design for the Wild Dog Pack Totem.

What are your thoughts? 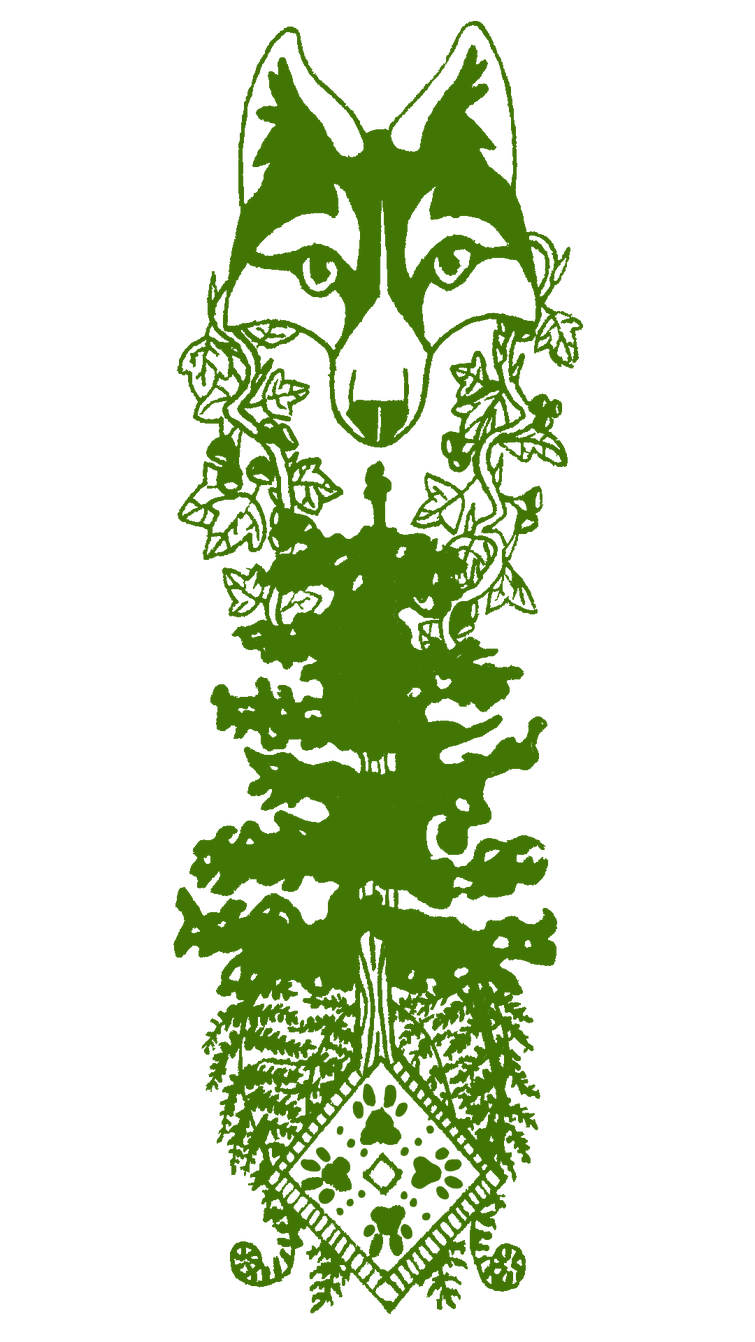 I haven't been active!

In honor of pride month, I was thinking that it would be fun to discuss our LGBTQ+ Survivors headcanons. my personal favorites are aroace Storm, lesbian Breeze, lesbian Thorn, bi Lucky, gay Mickey, ftm Twitch, and I really like genderfluid Whisper.

Feel free to share any headcanons you have! I know I don’t have to worry about this with most of you, but please don’t be homophobic!

Dogs are dying, and no one knows why.

Many dogs think it’s sickness, others think it’s poisoned prey, and some even believe that a murderer—a traitor to their own pack—is responsible for the deaths.

However, their Alpha, once a seemingly brave and determined leader, refuses to believe that anything is wrong. As deaths increase and tensions rise, a small group of dogs starts a rebellion. Outraged by their Alpha’s refusal to solve the problem, they decide to take matters into their own paws.

Pings (I'm pinging everyone who voted, sorry if you don't like being pinged!) 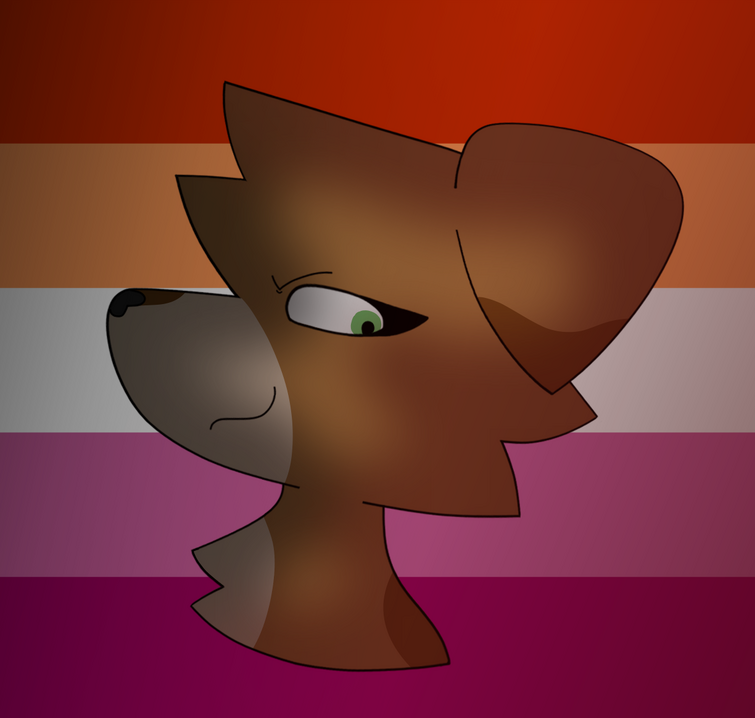 In honor of pride month, I have drawn lesbian Breeze. I have nothing else to say but enjoy this drawing.

Hello! Why is the image of a dog with spots on the right side in the infobox of the Golden one, if this is more consistent with the Tough one? 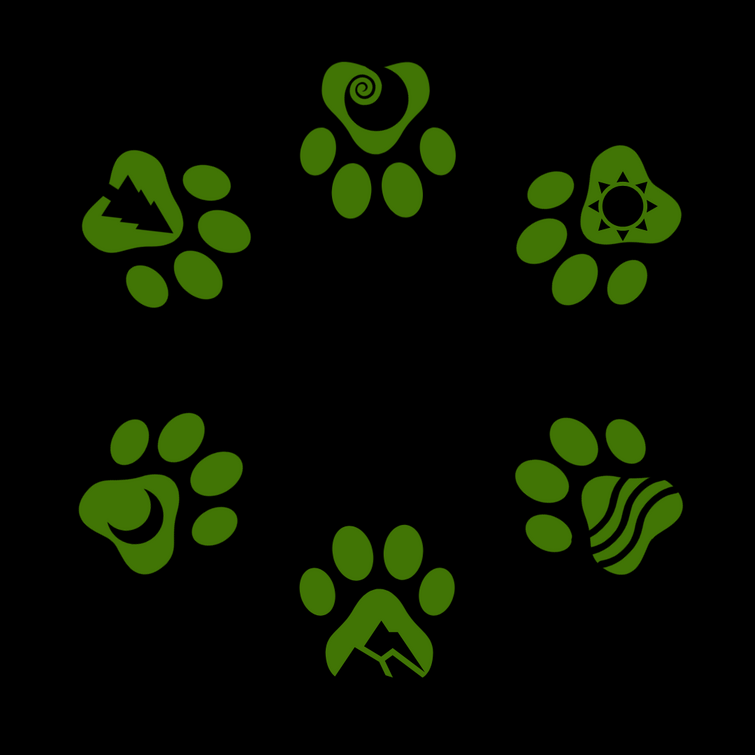 Can this be on the wiki as well as the website icon? Supposed to represent the 6 spirit dogs.

Hey, i KNOW i keep promising that ill be more online and then never am

There is... just not much to do here anymore

Im not saying that the wiki is dead, of course

I dunno, i noticed that there arent many new roleplays, new fanfics(too lazy/busy to continue my own fanfics) and stuff

Anyway, how are you all?