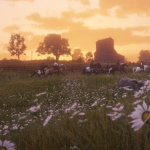 I am Storm. Feel free to leave me a message if you need something.